Rim to Rim at the Inaugural Many On The Genny 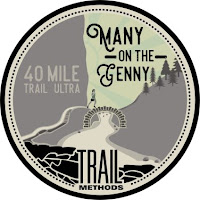 I’m not sure when exactly it was that #TrailsRoc cofounder Eric Eagan said "Hey, why isn’t there a race that circumnavigates Letchworth, like a rim-to-rim race around the Grand Canyon of the East?" When I first caught wind of the race last fall, I was beyond psyched. After a rambling adventure run around the park two years ago, I had a vague notion to organize a fat-ass run that circles the gorge and covers all of the most scenic park trails. The fat-ass idea never made it any further than thinking "Yeah, it would be cool to see the whole park in one day."

Many On The Genny is a point-to-point trail race that starts at the Mt Morris Dam Visitor Center on the northwest side of Letchworth. The course follows several different trails and a little of the park road southwest down to Lower Falls, crossing the Genesee on the only footbridge within the park. The aid station just before the bridge marks the halfway point of the course. After crossing the bridge, runners take some side trails and a dirt road to reach the Finger Lakes Trail Letchworth Branch, then follow the FLT northeast to the Visitor Center opposite the gorge from where they started. The start and finish are about a quarter-mile apart as the crow flies, separated by the Genesee River and a 500-foot-deep canyon. The quickest way to travel from the start to the finish is to