No. Sleep. Till Hammondsport! — Twisted Branch 2018 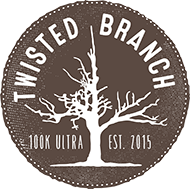 Now in its fourth year, the Twisted Branch 100k Trail Race is one of the more challenging ultras in New York and the northeast. The point-to-point course follows the Finger Lakes Trail's Bristol Branch from Naples down to Mitchellsville, then heads east along the main FLT before finishing at Champlin Beach in Hammondsport. The singletrack trails are somewhat remote and technical, serving up a healthy dose of rolling hills and steep climbs as the course twists its way through various state, county, and privately owned lands. The race also packs a punch with 11,000 feet of elevation gain and a 1,500-foot net loss.

I'd been hoping to run this race for the past few years, but other commitments meant I had to put it on hold. The point-to-point format on terrain similar to the FLT in the Ithaca area really appealed to my tastes. I finally committed to it early in the year when I signed up for all three races in the inaugural Empire State Triad Series. This series is comprised of Many on the Genny (40 miles) and the Cayuga Trails 50, with Twisted Branch as the 100k+ grand finale, measuring long at nearly 65 miles. The buildup in distance throughout the summer seemed like a logical thing to do. My main focus was a good performance at Twisted Branch since it's the only race in the Triad I hadn't previously run.

The pre-race logistics were different than anything I'd been through before. Because of the 4 a.m. start, the shuttle buses from the finish line to the start run the night before the race. That meant arriving at the finish line in Hammondsport on Friday

The Time I Ran 40 Miles For a Garbage Plate

I've resided in Upstate New York my entire life — 35 years, 7 months and 28 days, to be exact — before finally experiencing  Rochester's signature dish affectionately known as a garbage plate. I like to run a lot and I like to eat a lot. This is my story.

I ran along the top of the canyon, taking in the view of the Gennessee River several hundred feet below and winding through the damp singletrack. I let the lead pack of four go on ahead and settled into my own rhythm, alone. I briefly considered trying to hang with the leaders' easy pace, but it felt just a little too fast for the opening miles. That pack included women's defending champion Ellie Pell, eventual men's winner Phil Nesbitt, and two guys I didn't recognize. Only 38 miles to the garbage plate remained.