I first learned about the Pine Creek Gorge West Rim Trail from Phil Maynard last year after he hiked it with his son over two days. He described it as smooth and fairly fast, unlike most of the technical, rock-strewn singletrack that winds its way through the Pennsylvania Wilds. Phil ran a south to north  FKT on the West Rim earlier this year, which re-piqued my interested in making this adventure run happen.

I'd only been down to the PA Wilds area once, when I ran the Eastern States 100 in 2017. That race covers only a few miles of the West Rim Trail, near the trail's southern end. My friend Amelia and I decided to head down on a weekday to run the trail end-to-end, an impromptu 50k. We drove to Pine Creek Oufitters, an outdoor gear and rental store in Wellsboro near the West Rim's north end. The store offers shuttle rides to the opposite end of the trail (or other drop off points on this and other trails). For us it was $40 for the 30-minute ride. They let us park the car at the north terminus parking lot on Colton Road instead of having us leave the car at the store. This way we didn't have to run an extra mile on asphalt at the end to get back to the store. Other possible transportation arrangements include parking a car at each end, or for the more adventurous and multi-sport inclined,
biking the Pine Creek Rail Trail or paddling the creek for the return trip to the car. The bike and paddle options are each about 20 miles.

The trail itself covers 30 miles, running mostly parallel to Pine Creek and its adjacent rail trail. After an initial two-mile, 1,000-foot climb from Rattlesnake Rock, the southern terminus, the trail flattens out and comprises many flat sections and rolling hills for nearly the entire way. The last 2.5 miles drop about 600 feet off the rim—a gradual descent that makes for some fast and fun running over smooth terrain. This descent leads straight down to the Colton Road parking lot. My Suunto Ambit 2 measured 4,551 feet of gain and 4,085 feet of loss over the entire route (and 4,957 feet of gain when uploaded to Strava.) Most of the hills are gradual enough that it felt like a lot less elevation change.

The West Rim Trail is blazed orange from start to finish, and the turns are all well marked with double blazes and sometimes signs. Along the trail are several viewpoints overlooking the gorge, the creek, and the forested, 2,000-foot hills on the east side. It's definitely worth stopping to take in the view at each of these spots. The trail is also made up of many miles of soft, squishy pine beds—I guess Pine Creek is a fitting title. There are some stretches where the trail diverts westward away from the gorge's rim for a few miles, but it always returns to the edge. We bought a small, waterproof map for $4.00 at Pine Creek Outfitters and found it helpful, especially on short stretches of dirt road between the singletrack.

There are enough reliable streams that stopping to filter water is a possibility if there's any concern of running out. We didn't see any rattlesnakes, bears, or other potentially dangerous wildlife, but I've read that they do inhabit the area. The only thing you really have to watch out for is nettles (at least in the summertime). There are several sections of narrow trail with stinging nettles that can't be avoided, sometimes as high as three feet off the ground.

Amelia and I ran the whole trail at a long run, casual effort, with high humidity in the first half and light to moderate rain for the second. I still had a ton of residual fatigue from running the Finger Lakes 50s 50-Mile ten days prior, and struggled on the West Rim's downhills. It took us about seven hours, including stops for scenery, map consulting, and one instance of missing a turn. 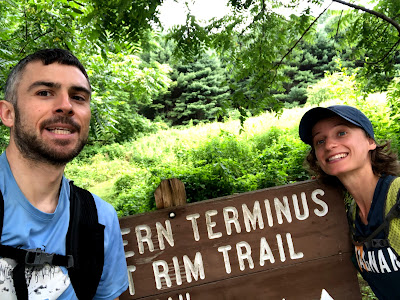 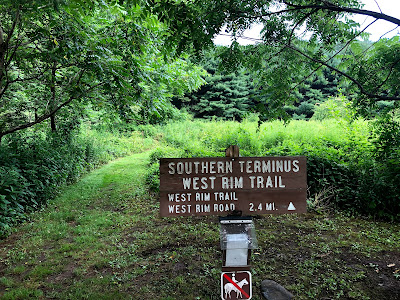 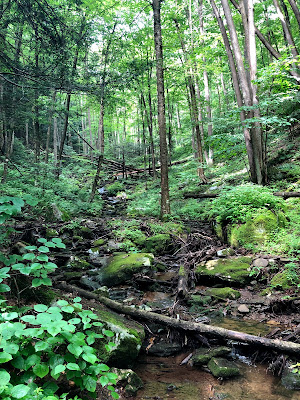 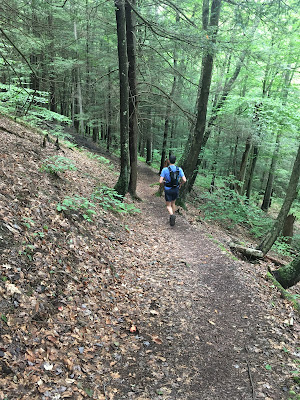 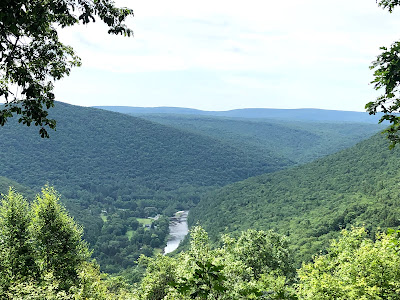 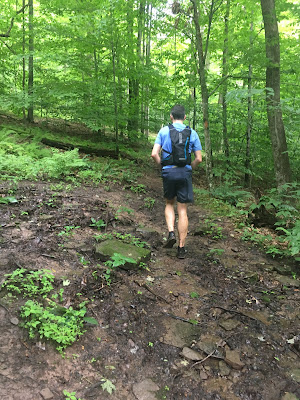 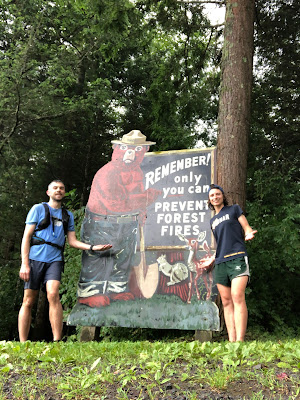