Not Quite Dawn to Dusk at The Seneca7

The Seneca7 is like a scaled-down version of the Ragnar. Teams of seven race on the roads and circle Seneca Lake in a counter-clockwise direction, mostly sticking to New York State Routes 14 and 414, for 77.7 miles. Each team member completes three legs, passing the baton﹘or in this case, an early-1990s snap bracelet﹘to the next runner at the conclusion of each leg. The other six members who aren't running at any given time have a chance to rest while they travel from one exchange to next next in their team vehicle. (Unless of course, the team registered in the bike division. Then they cycle between exchanges and don't really get to rest at all!) The road route starts and ends in Geneva, NY, and runs through the heart of the Finger Lakes wine country while providing panoramic views of the lake and it's opposite shoreline. Several of the exchanges are even at some of the better known wineries.

When Hayley first proposed the idea of getting a relay team together for the Seneca7, I was immediately intrigued. I'd never been on a relay team before, and I'd heard a lot of good things about the event. We were easily able to recruit four other local friends﹘Ruth, Norah, Juan, and Nate. Juan's father-in-law, Jack, took the final spot. Jack is a veteran runner who'd previously convinced Juan into to take up running by registering for a ten-mile mountain run somewhere in the northern
Adirondacks. He'd have no problem keeping up with a team half his age. Except for Jack, we all already knew one another well and figured we'd make a good team. With the lineup in place, we were lucky enough to sign up immediately after online registration opened. This year it sold out in a few hours, which is typical of the race.

Fast forward five months to race day. The seven of us met at Norah's house in Ithaca at 4 a.m. and piled into a rented Dodge Caravan. Starts were staggered based on each team's predicted pace, with the speedier teams starting later. We expected to move slowly﹘and perhaps drew the short end of the straw﹘and were rewarded with a 6 a.m. start in the first wave of the day.

Our team Dawn to Dusk had submitted a predicted average pace of ten minutes per mile, which is just under 13 hours for the entire race. We realistically expected to be out there until sundown. With Hayley's recent injury and her decision to walk each of her legs, we figured things would average out over the course of the day, but really we had no idea. Our first three runners﹘Norah, Ruth, and Juan﹘ran their legs at a pace quite a bit faster than expected. The rest of us rode in the Caravan commandeered by Jack and Juan, from one exchange to the next, to wait with the other teams for our runners to come in.

We quickly fell into a routine to navigate through each leg. I try to get a few photos of the snap bracelet hand-off. Norah logs the exchange time on the race website as required. We all pile into the Party Wagon and drive slowly to the next exchange, while Jack tries his best not to mow down runners on the shoulder or knock cyclists into a ditch. Each time we pass our runner on the side of the road, the van slows and a raucous cacophony of cheers, cowbells, cat calling ensues. Wash, rinse, repeat.

Several months earlier, Hayley had expressed concern that she should drop form the team because of a training injury. The rest of us talked her into not dropping out and that walking was totally acceptable. Putting the team together was her idea, and we weren't competing for awards anyway. It was all about the camaraderie and adventure. When we passed Hayley coming up Route 414 on the long climb out of Watkins Glen, we knew that she'd made the right decision by deciding to stay on the team. As we passed, Hayley was speed walking as fast, or faster, than most of the people running up that same hill!

It was around the halfway point in Watkins Glen that we realized we'd probably finish way ahead of the 13 hours we'd submitted to the race organizers. There's a rule that a team has to finish within 10% of their predicted time, or get hit with a 27-minute penalty. This is to ensure that the faster teams start later, thus reducing traffic congestion on the roads and pedestrian congestion near the exchange points, while allowing everyone to finish around the same time of day. After Juan hauled it down Route 14 into Watkins Glen at a low 7-minute pace and then Hayley made short work of the ascent back out, we knew we'd finish more than 10% faster than the 12:57 we'd predicted. As a team, we agreed "penalties be damned" and decided to wrap things up as quick as we could. Team Dawn to Dusk started running at dawn, but we'd finish with a few hours of daylight remaining.

Prior to the race, I'd agreed to take whatever runner position no one else wanted. The rest of the team duly awarded me the number five slot﹘the position with the highest mileage. Over three legs﹘numbered 5, 12, and 19﹘I'd total 13.5 miles, but with a few hours of rest between each section. I tried to maintain a 6:45 pace on each, which seemed reasonable. At 4.8 miles, Leg 5 was the hilliest of the three and I finished right on pace. Leg 12 was 6.1 miles, but the net downhill allowed me to go a little faster.

Since Leg 12 is the longest of the entire race, the organizers decided to split it up. They provided a "pit stop" at Grist Iron Brewery for those riding in vehicles or on bicycles. As I was out there on the run, the Dawn to Dusk Party Wagon pulled into Grist Iron to meet up with Juan's wife Katie and their two-month-old daughter. I had no idea what they were up to, as they'd already passed and heckled me a mile into the leg. The next thing I knew, they were passing and yelling again. "I've got one mile to go!" I screamed back. With the mid-afternoon traffic flow and all the hustle and bustle of the event, it would be a close call getting Jack to the exchange point before I arrived on foot. Yet somehow they got there on time and he was ready to run.

As we pulled into Seneca Lake Camp, the exchange where I'd wait for Hayley and then start my final leg, it was apparent that a quick exit in the van was impossible. There were just too many people and cars, and part of the dirt road to the parking area was closed due to a washout. Leg 19 was only 2.6 miles, meaning my teammates wouldn't have much time to mess around in traffic. Jack tried to convince the volunteer traffic marshals that I'm a world class runner, (spoiler alert﹘I'm not,) and he'd need to get the van on the road stat. They finagled some sort of Irish exit and made it to the next exchange with enough spare time while I ran Leg 19 at my fastest pace of the day.

Dawn to Dusk kept up the overachieving pace throughout the final third of the race. Ruth and Juan both ran well on the off-road sections at Sampson State Park. None of us slowed down significantly on our final legs. As we waiting for Nate at Lakefront Park in Geneva, we knew we'd break 11:30 as a team. Nate arrived at the team meetup spot and we all jogged the last 100 meters together for an 11:25 finish.

The post-race event was pretty good even though we were all cold and tired. Runners hung out at the park on the water's edge and swapped stories. Seneca7 provided the vegetarian chili and cornbread. Norah's parents provided the beer. Each runner received a finisher's medal corresponding to his or her runner position on the team, meaning each of our medals was different, cut with numbers one through seven.

I was saddened to learn the following day that one runner﹘a well-known triathlon coach from Syracuse﹘collapsed during the race, received CPR, and ultimately didn't make it. Although I never met Brendan Jackson, I know many people who were acquainted with him. Condolences to his friends and family.

Each of my relay legs turned out to be a solid lactate threshold workout. The relay was my third race of the month and only two weeks removed from the Breakneck Point Marathon. During the relay, I felt fully recovered from the Breakneck run that had left me pretty battered. I had also run the Springletrack Fat-Ass on April 1 as part of a big training weekend, then made the wise decision to hold back during the Skunk Cabbage Half Marathon on April 9. My body felt normal two days after Seneca and I got back into my regular running routine. Next up is the Thom B 52k on May, and then Cayuga Trails on June 3.

As it turns out, Dawn to Dusk was ultimately not assessed with the 27-minute penalty for finishing too early. That left us with an official time of 11:25:55, for an average pace of 8:50 per mile. We placed right in the middle of the pack in 137th overall, and 84/184 in the Mixed Division. Congrats to Cayuga 7, the Ithaca-based team comprised of High Noon AC and Red Newt Racing athletes, who set a course record in the Mixed Division and finished second overall. (Full results.)

The best part about the Seneca7 is the teamwork. Everyone on the team meshed well and kept a great attitude despite the long and tiring day and the stressful driving situation. For how large and involved the event is, the organizers did a good job keeping things under control and having rules in place for the safety of everyone involved. One volunteer really made an impression. As I thanked the elderly man that was road marshaling at Seneca Lake Camp, he replied "I've been here every year so far. And I wouldn't miss it for anything." And his face told me that his words were genuine. 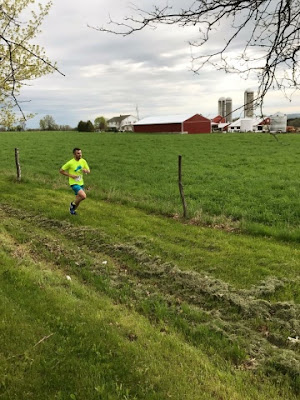 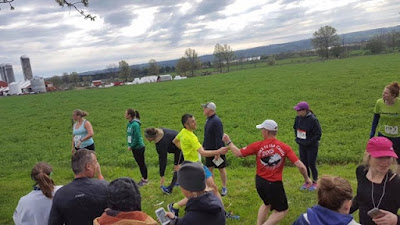 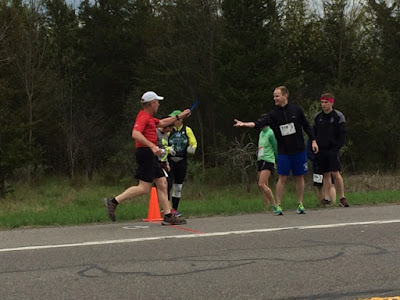 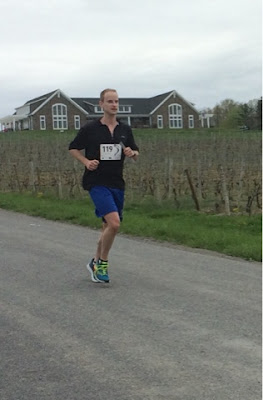 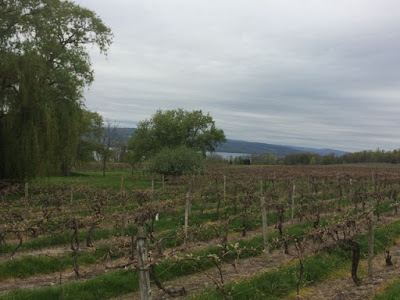 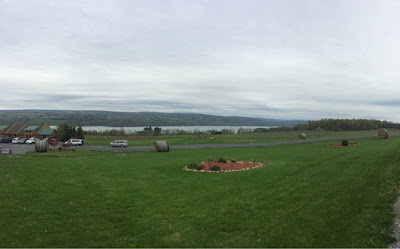 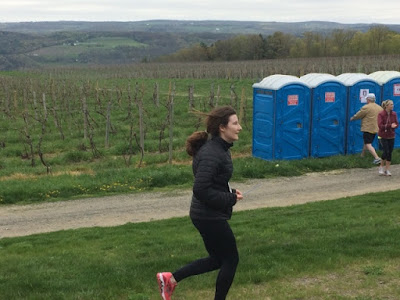 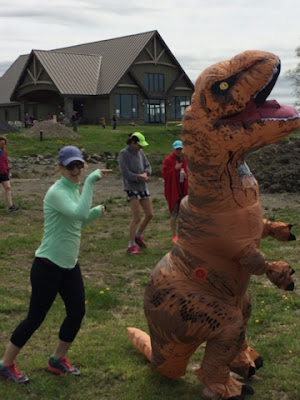 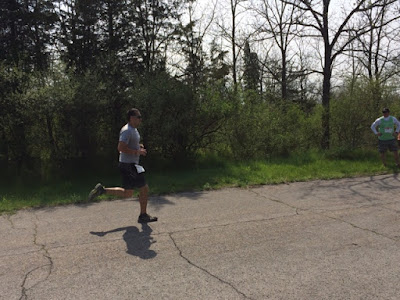 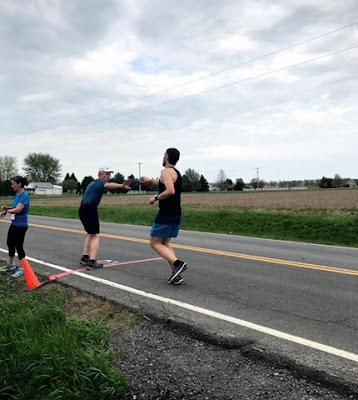 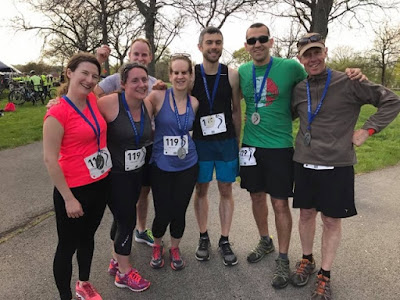 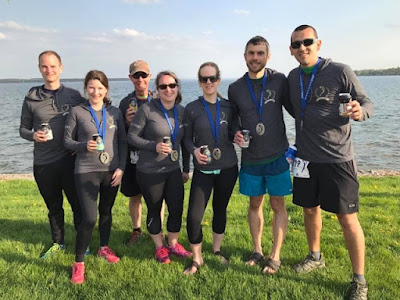