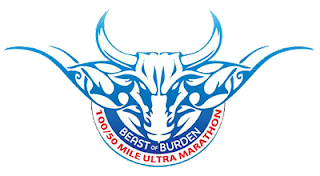 After sticking mostly to singletrack and mountain ultras in 2017, I decided it was time to change things up and train for an ultra that's flat and a hundred percent runnable. The Beast of Burden is just that. It follows the old Erie Canal towpath from Lockport, NY, eastward to the town of Middleport and back. 25-, 50- and 100-mile runners all start together and run the same 25-mile out-and-back to Middleport once, twice, or four times. I had a rough day at this race back in 2016, and knew I could return and improve by a huge margin.

As I've mentioned in a previous race report, I created my own training plan based on guidelines from the book Training Essentials for Ultrarunning by accomplished ultramarathon coach Jason Koop. In years past, I always spent the winter months dabbling in other activities like snowshowing, hiking, and yoga, and running sporadically on roads and treadmills or fumbling around on snowy trails. This winter was different. By running almost exclusively on roads and rail trails, I'd improve my endurance enough that it would carry over to trail running come springtime. The goal of the 16-week plan was
to build up my cardiovascular fitness and all-around endurance enough to lower my "forever pace." This would effectively allow me to run at a faster pace for the duration of an ultra. The end goal of the training cycle was to run a solid race at The Beast of Burden Winter 50, take a week or two to recover, and then ramp up with the next training cycle. I chose The Beast because it fit my training schedule and the course mimics the roads I'd be training on. The race would essentially be a fitness test to see how my body was adapting to the increase in volume and intensity.

Eight weeks into the training plan I began to see some big gains in my fitness level. My "steady state effort," defined as a 7 on a rating of perceived exertion (RPE) scale of 1-10—or roughly road marathon pace—began to drop. So did my "endurance run" effort, which is the effort one can sustain for several hours. After two late-cycle training runs yielded PRs for the 50k distance, I knew it was time to alter my goal. Instead of treating The Beast as a B-race, I decided this was a great opportunity to throw down and see just how fast I could go for a flat 50. My new goal was to break 7 hours and 30 minutes—a two-hour PR. Depending on who showed up on race-day, I could potentially be running for the win if I managed to go a bit faster. It was time to slay The Beast.

At any mid-February ultramarathon in northern New York the weather can be a huge factor. Previous editions of The Winter Beast have been run in blizzards, sub-zero temperatures, and clear days with 6-12 inches of snow on the course. With no tree cover, unpredictable heavy winds can sometimes be detrimental too. The Beast of Burden Summer Ultra—same course, same format—yields some of the fastest 100-mile times in North America every year. Given the Winter Beast's unpredictability, though, anything goes in Lockport come February.

The Beast runners really lucked out on race-day this year. The entire course was free of snow and ice and temperatures hovered around 30°F. Earlier snow-melt left some patches of mud scattered throughout, but not enough to make things difficult. It was reportedly the best weather the race has ever had.

The eventual 25-mile winner took off right from the gun and was soon out of sight. I soon fell into a groove about 30 seconds behind the 50-mile leader. I planned to take the first 15 miles or so at 8:15 - 8:20 per mile pace, but my watch kept reading 7:55 - 8:00 even as I was consciously trying to slow down. I knew 8-minute pace was absolutely not sustainable for 50 miles and didn't want to ruin my day as soon as it began. Around mile 5 I was caught by Carsten Meyer-Jacob. We ran together and talked for a mile before I realized he was pushing my pace even faster. I stopped to water a tree and let him go ahead. This dropped me back to third, but his pace was too fast this early. I was determined to run my own race and if I reeled in the two leaders, so be it, but winning wasn't my main goal.

I arrived at the 12.5-mile turnaround in Middleport in 1:40 elapsed. To reach the aid station, runners have to cross the bridge over the canal, follow the sidewalk 100 yards down Main Street, and enter the community center where the volunteers and drop bags are. As the only runner in the building I had the place to myself. The volunteers were extremely generous in trying to help me out, but it took a lot less energy to fill my handheld and grab food myself instead of telling them what I needed. I'd come prepared with most of my own nutrition in a waist belt in order to limit time stopped at aid stations.

As soon as I set out on the "back" portion of the first out-and-back I faced the headwind for the first time. I realized then that the wind had given me a huge boost while running eastward and it's what made that 8:00 pace feel so easy. I began to slow to 8:15 - 8:20 per mile while fighting the wind. I also began passing all the runners behind me as they neared the turn-around, and passed the Ithaca crew—Jeff Holbrook, Chris Van Druff, and Chris Reynolds, who were each going for a 100-mile finish.

Throughout most of the flat, open course you can see at least a half-mile in front of and a half-mile behind you. The trick to breaking down the race is to look for a bridge over the canal—sometimes a mile or two away—and just focus on reaching the bridge. When you reach it, keep on moving and then focus on the next bridge or, in some cases, an upcoming aid station. There's not really much else that can serve as a landmark.

I reached the start/finish tent at mile 25 in 3:25, still feeling pretty good. I thought there might even be a chance to drop a 3:34 second half and break 7 hours. Rage Against the Machine's "Bulls On Parade" was blasting from the aid station tent—perfect for amping up the adrenaline and keeping the stop time to about a minute.

A mile into lap 2 I moved into second place and tried to put some distance between myself and the other runner. The wind was once again my ally over the 12 miles out to the final turn-around at Middleport, but I began to slow enough that a sub-7 finish was no longer possible. While I never bonked per se, I did take a few walk breaks to compose myself mentally and muster the strength to click off another 20 miles. With the lack of scenery and variable terrain, The Beast was wearing me down more mentally than physically, and I needed the breaks to stay focused and avoid meltdown territory.

Back inside the Middleport aid station, I filled my bottle with Tropical Buzz Tailwind from my drop bag. I left, heading west back along the canal, and took note of the irony that I was fighting the headwind with Tailwind. The caffeine kept me cruising through most of the race's fourth quarter. By now I was three miles back from the leader with the overall win out of reach.

I don't know whether or not the race directors were intentionally cruel with the course layout. As you follow the path back down to the start/finish area, the finish line and aid station tent are visible directly across the canal, no more than 100 yards away, and you can clearly hear the 90s alternative and grunge tunes blasting over the PA. It's hard not to picture yourself in the midst of it all, but then you snap out of it and realize you've got another two miles to run. After 7 hours and 48 miles, another two might as well be another 50. I can only imagine what the 100-milers were thinking when they reached mile 98!

7:20:15 was my official time, besting my 50-mile PR sat at this race in 2016. The second place finish and 8:48 average pace for the distance is easily the best running performance I've ever had. Clearly the structured, periodized plan I'd created based on Training Essentials for Ultrarunning has served me well. Multiple blocks of training at different intensities has, and will continue to, increase my speed across all distances and surfaces. (Full results.)

The race directors and the volunteers did an amazing job of putting everything together! Every 50- and 100-mile runners got a pretty sweet full-zip fleece sweatshirt in his or her swag bag. Extra kudos to those volunteers who spent the cold night out in the aid station tents selflessly assisting the 100-mile runners. Thank you!


"And to prove it really happened..."