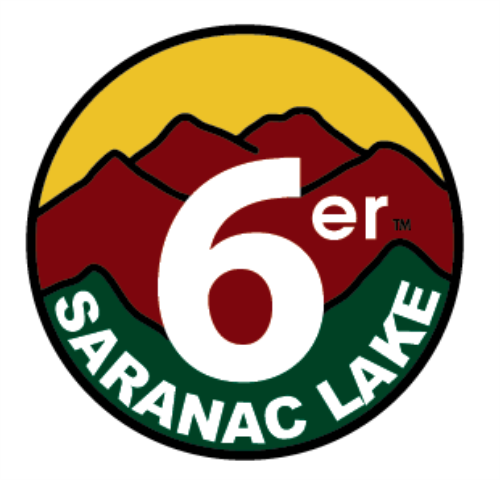 While trail running is certainly the outdoor activity I favor beyond all others, hiking, the close cousin of trail running, is one of the most rewarding activities one can partake in. Mountain trails leading to a nice view of valleys, forests, and open sky can provide a sense of satisfaction and accomplishment that comes with a job well done. Sometimes it just seems more appropriate to move slower, forget about pacing, and stop to smell the roses, pines, and singletrack.

Last year, some friends and I began the Saranac Lake 6er challenge, which consists of hiking the six mountains surrounding Saranac Lake in the upper east side of the Adirondack Park Preserve. The challenge kicked off on May 25, 2013, as an attempt by the village to draw more people to the trails and mountains in the immediate locale of Saranac Lake, rather than to the more popular High Peaks region surrounding the village. The 6er program requires hikers to reach the summit of all six mountains on or after the kickoff date, even if it means taking many years to bag them all. The program also offers an Ultra 6er challenge, which requires hikers to complete all six peaks in a 24 hour period, while beginning and ending at the 6er bell in the center of town. Additionally, the Winter 6er and Ultra Winter 6er challenges have the same requirements listed above but the peaks must be completed during the winter months.

On Memorial Day weekend 2013, a few friends and I spent the weekend in the town of Saranac Lake hoping to finish the 6ers in two or three days.  Unfortunately, torrential downpours made for slow going, and we were only able to complete Ampersand Mountain and St. Regis Mountain. The muddy and waterlogged trails, cold air, and lack of views made for a miserable hiking experience.

While the 2014 edition of Memorial Day weekend saw some rain in the northeastern Adirondacks, it wasn't enough to cause any real misery. A group of us rented a cabin in Lake Placid, home of the 1932 and 1980 Winter Olympics, and only about 10 miles from the trailheads to the 6er peaks we hadn't previously completed. 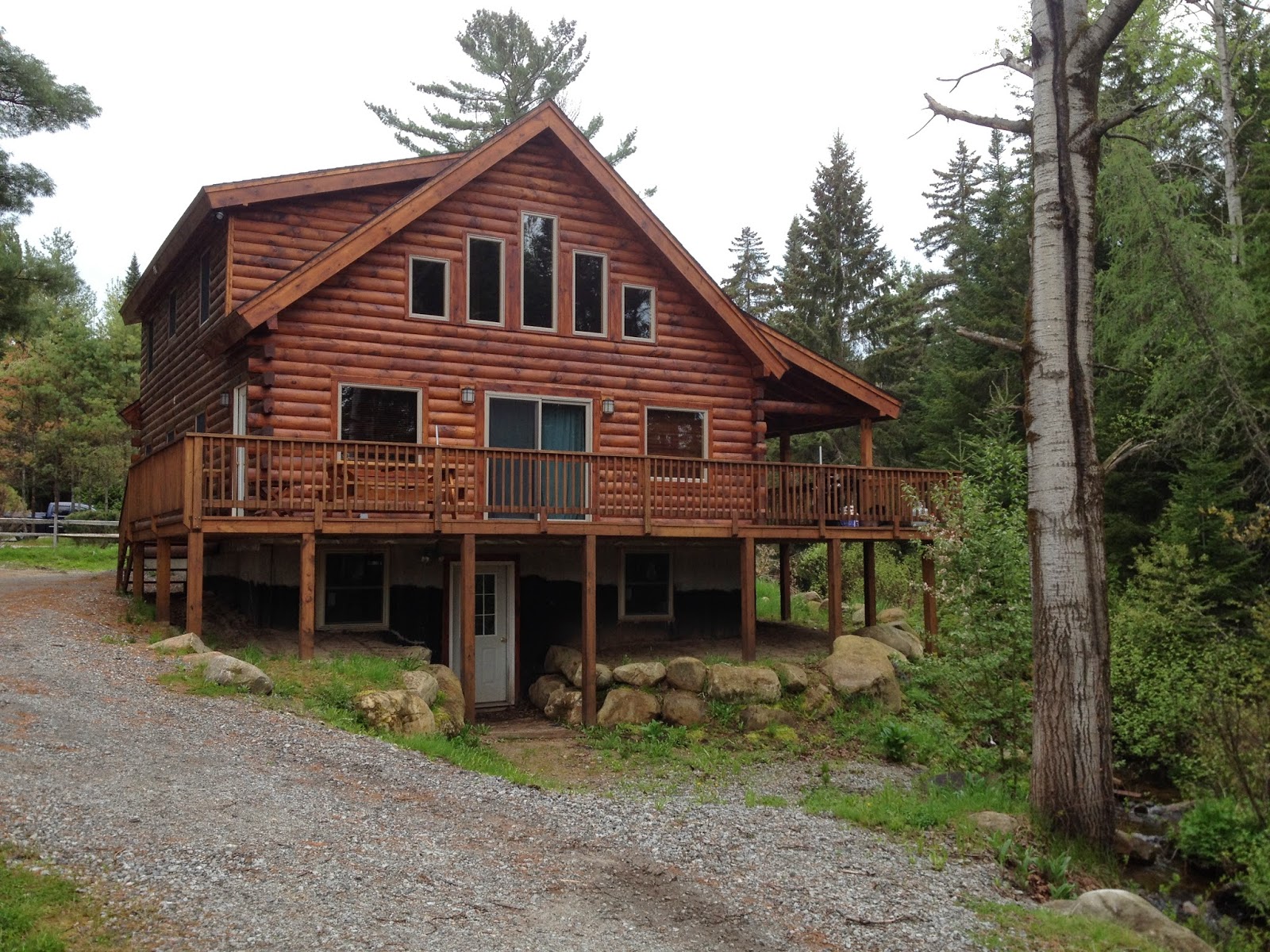 On Friday, my friend Adam and I decided to run/hike Scarface Mtn. That is, run as much as possible, mainly just the relatively flat and non-technical sections, while hiking the steep and rocky pieces of terrain. The rain  predicted for this day came to a halt early on before we left the cabin, and for the most part, it held out until the hiking was finished. However, the fog prevented us from seeing much of anything from the top, and I declined to take any pictures from the viewpoint near Scarface's summit.

Afterward, Adam and I ran/hiked up Mt Baker, the shortest and lowest of the 6ers.  Despite the small stature of the mountain, it was quite steep near the peak and took a little longer than expected. I did not take my phone/camera with me on this run, but returned two days later for some pictures of Baker's spectacular scenery. Running the two mountains also gave me the chance to try out my new Ultimate Direction Scott Jurek Ultra Vest. (Which works great, by the way. More on that in a future post.) 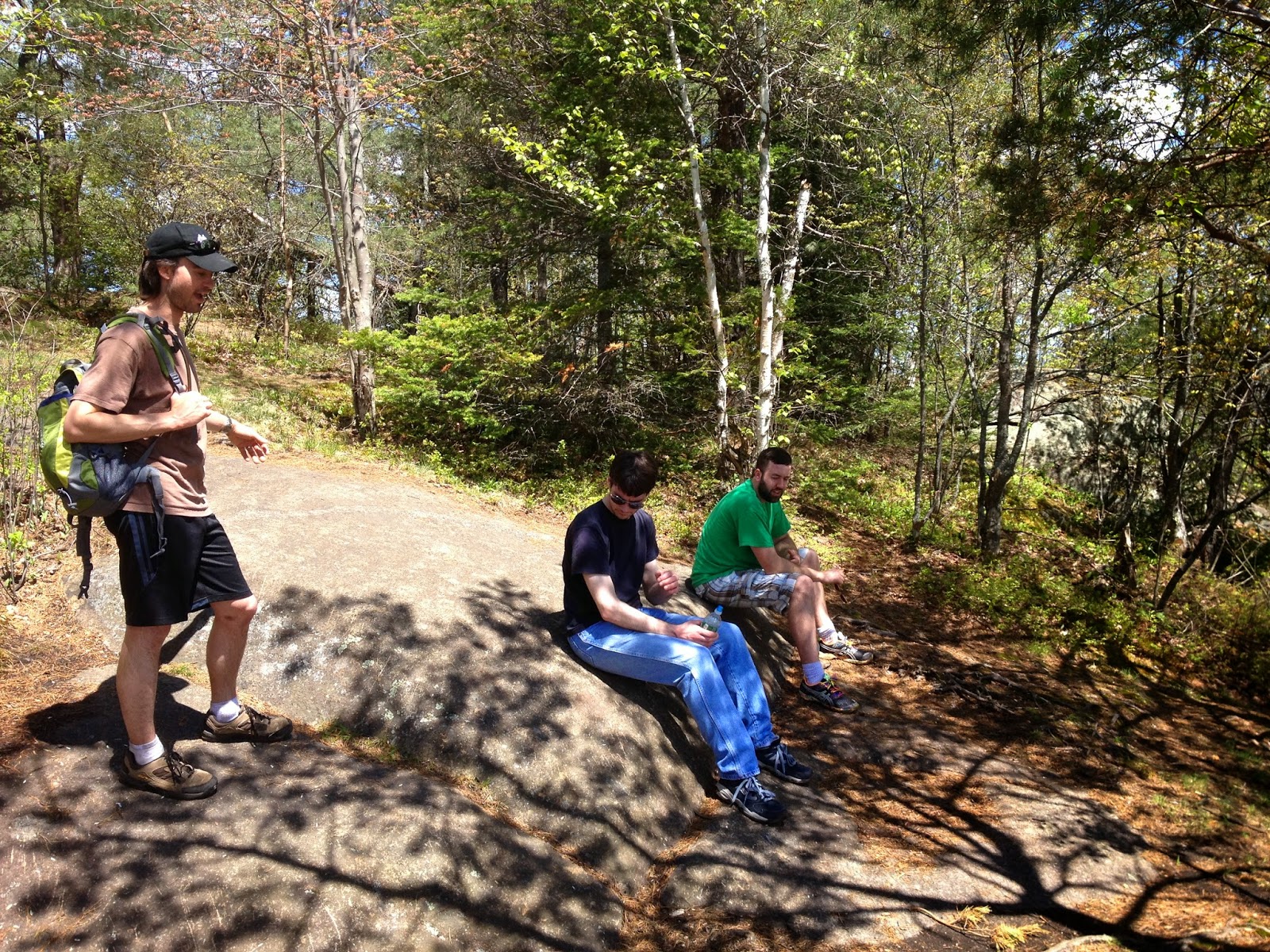 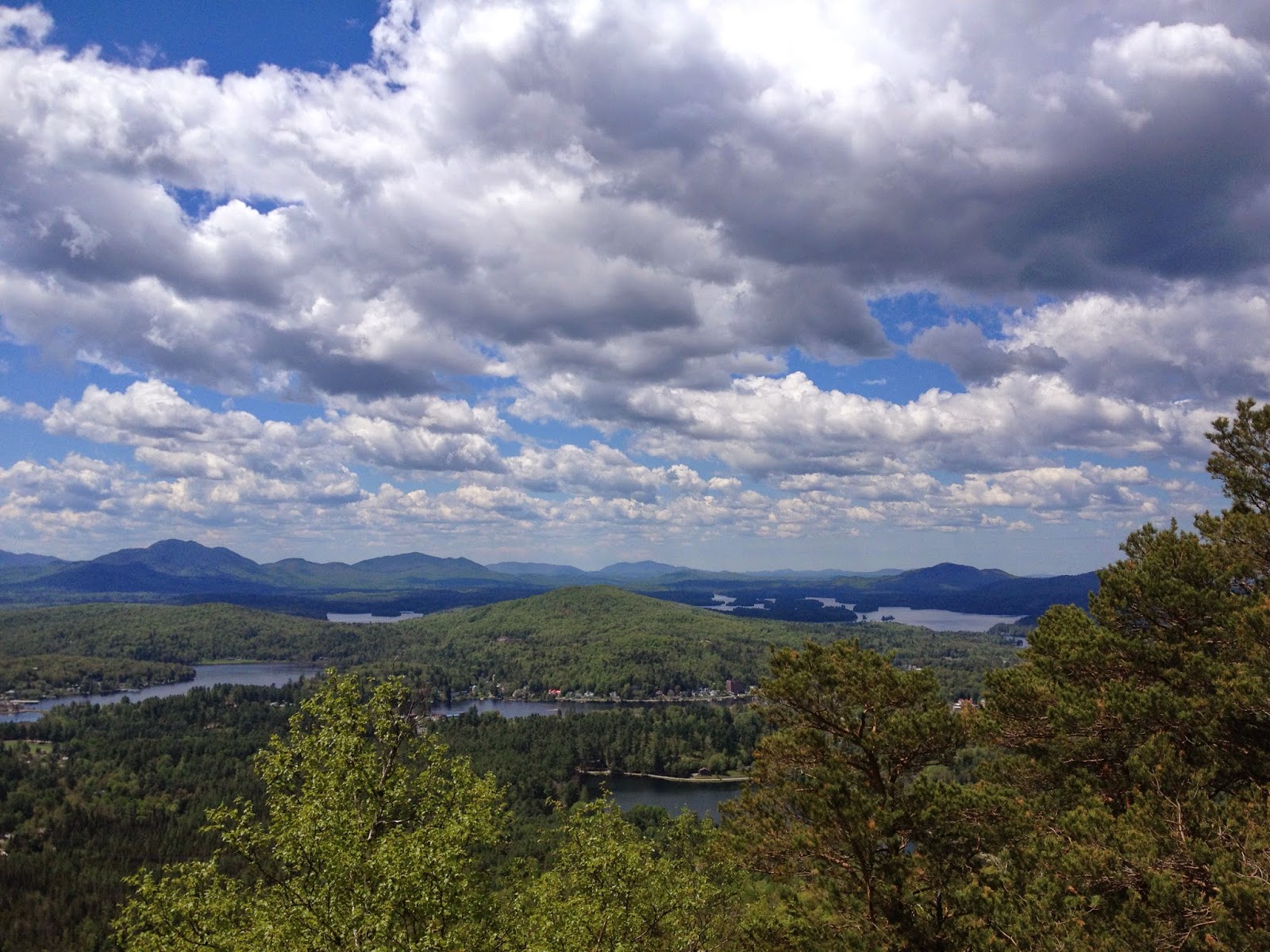 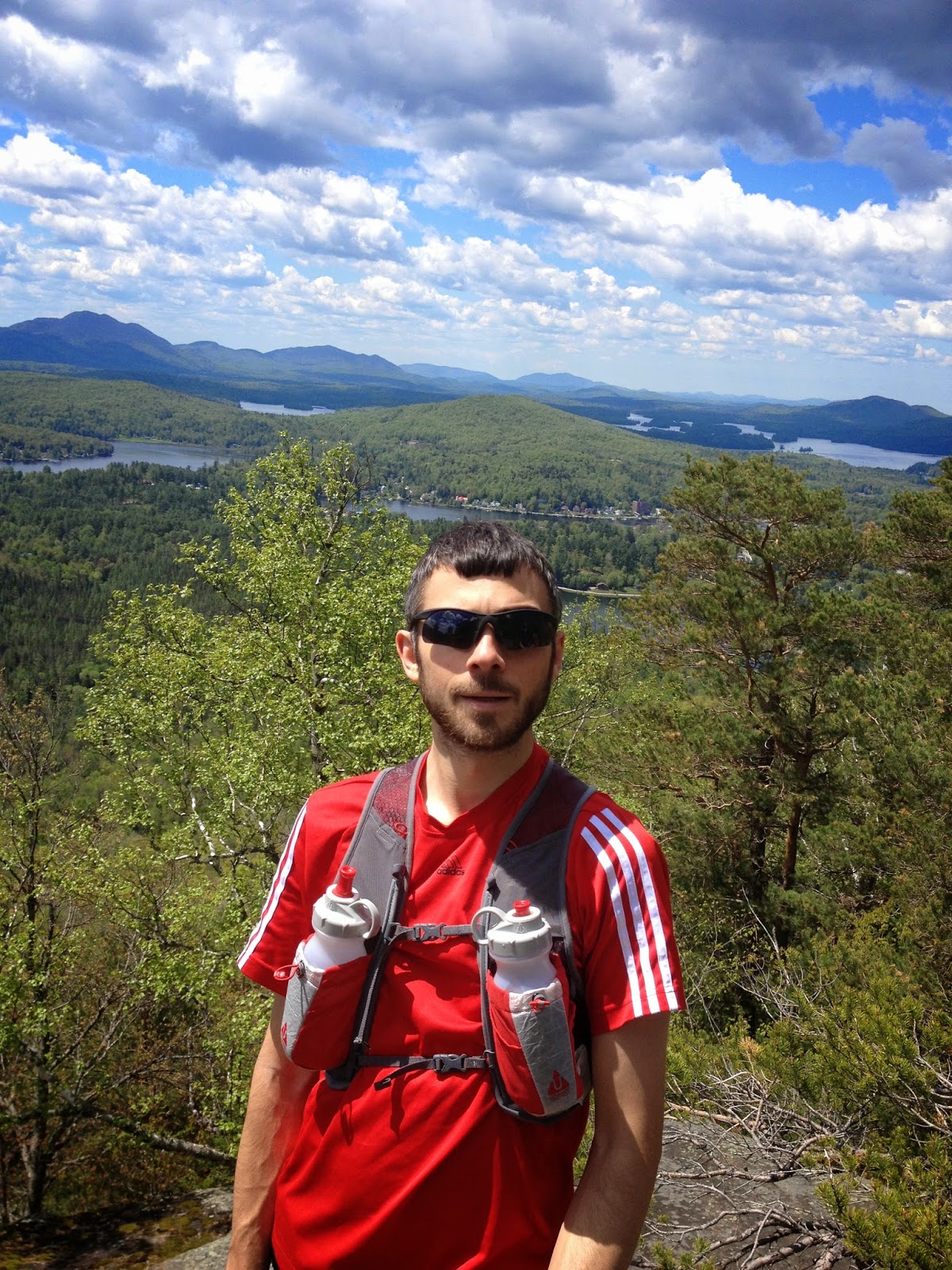 The following day, I returned to the trails to complete the 6er challenge. Haystack Mountain sits on a side trail on the route to the peak of McKenzie Mountain, about a mile off McKenzie's main trail. Several of us ascended Haystack and the downpour held out until we returned to the trail junction. From this point, my cousin and I split off to bag McKenzie ourselves while the others returned to the car. At 3,822 feet and unimpeded by fog or rain, the top of McKenzie offered the best summit view among the 6ers. The vast expanse of green forest and distant ADK high peaks, as well as the view of Lake Placid in the valley, provided a breathtaking view. With McKenzie in the books I was done with the challenge. The round trip for both McKenzie and Haystack took about six hours.

The following afternoon, we made our way to the 6er bell in the center of town and rang the bell six supposedly times. The sweet sound of the Saranac Lake 6er bell is said to bring good luck to those who ring it after completing the challenge. However, caveat emptor to those who sound the bell falsely, for they will suffer the Kiwassa Curse. 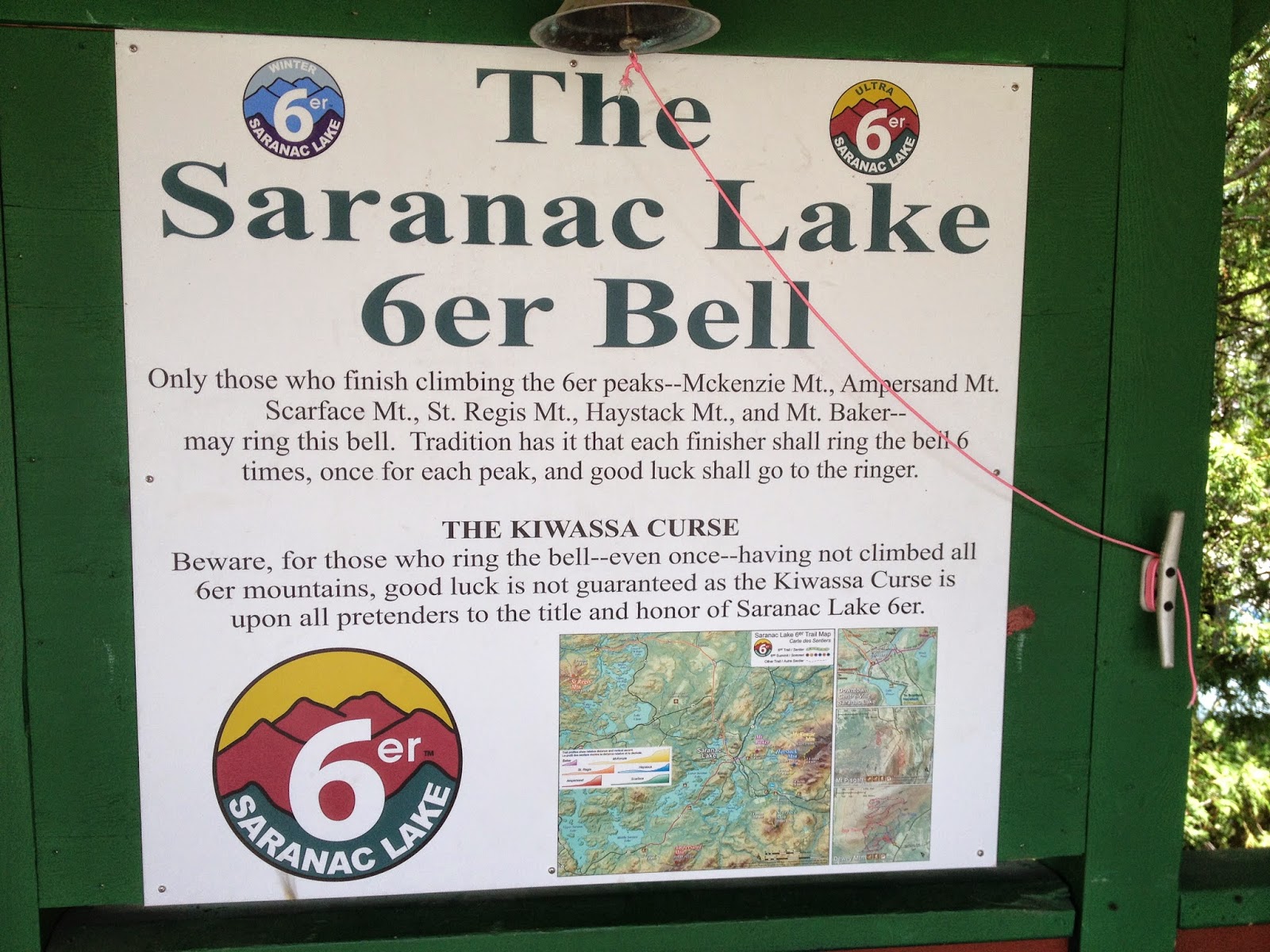 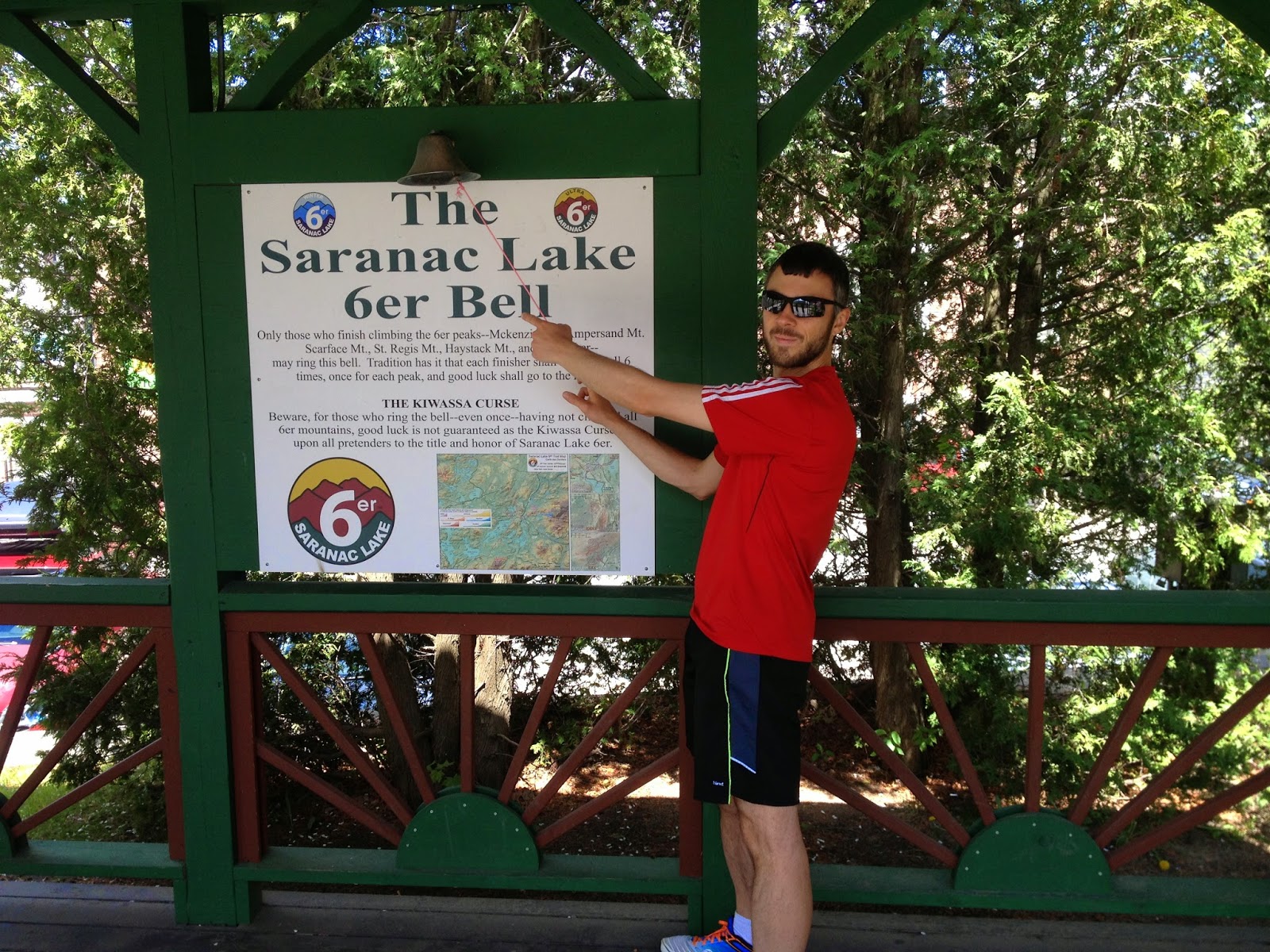 In the end, the Saranac Lake 6ers is another mini challenge for peak baggers, day hikers, or even families spending a week in the Adirondacks. (I did see a handful of children and dogs along the 6er trails.) It does offer some solid scenery and experience on the trails. Anyone craving something tangible can send their information to the village to receive a 6er patch and sticker recognizing his or her achievement. There's something there for hikers of all levels and abilities. For me, it was a nice way to spend time outside with some friends during my final weekend of tapering for the Cayuga Trails 50.

The morning of Saturday, May 10, saw the inaugural running of the Thom B Trail Runs 52k. The event itself has taken place for the past fourteen years as a 13k and 26k that are part of the Finger Lakes Runners Club Trail Circuit, but this was the first time the four-lap, 52k race was held. The plan was to shoot for a five-hour finish, while using the race as a long training run to test gear and fueling strategies for the upcoming Cayuga Trails 50 three weeks later. I did not intend to race hard today, and aimed for 5:00, or 1:15 per loop.

At 7:00 a.m., fourteen trail enthusiasts took the starting line for the four loops through Hammond Hill State Forest in Dryden, NY. Consisting of dirt roads, single track, ski trails and snowmobile trails, I was expecting a muddy slogfest due in no small part to the heavy rain of the previous two days. After a few words of caution and a few words of thanks, the early morning din of chirping birds and rustling leaves was suddenly disrupted by the race director's shout of "Thom B says go!" followed by the shouts and cheers of the fourteen runners.

The course started off uphill on a dirt road. The leader took off and—spoiler alert—I never saw him again until the finish line. Justin Trana and I settled into a "chase" pack at a comfortable pace and chatted for most of the first 7.8-mile loop. To the delight of my shoes and socks, the mud was minimal and the trails were entirely runnable. Towards the end of the loop, I

Well if I ever see the morning
just like a lizard in the Spring
I'm gonna run out in the meadow
to catch the silence where it sings.

I'm gonna force the Serengeti
to disappear into my eyes
and when I hear your voices calling
I'm gonna turn just inside out.

"I Won't Be Found"
- The Tallest Man On Earth 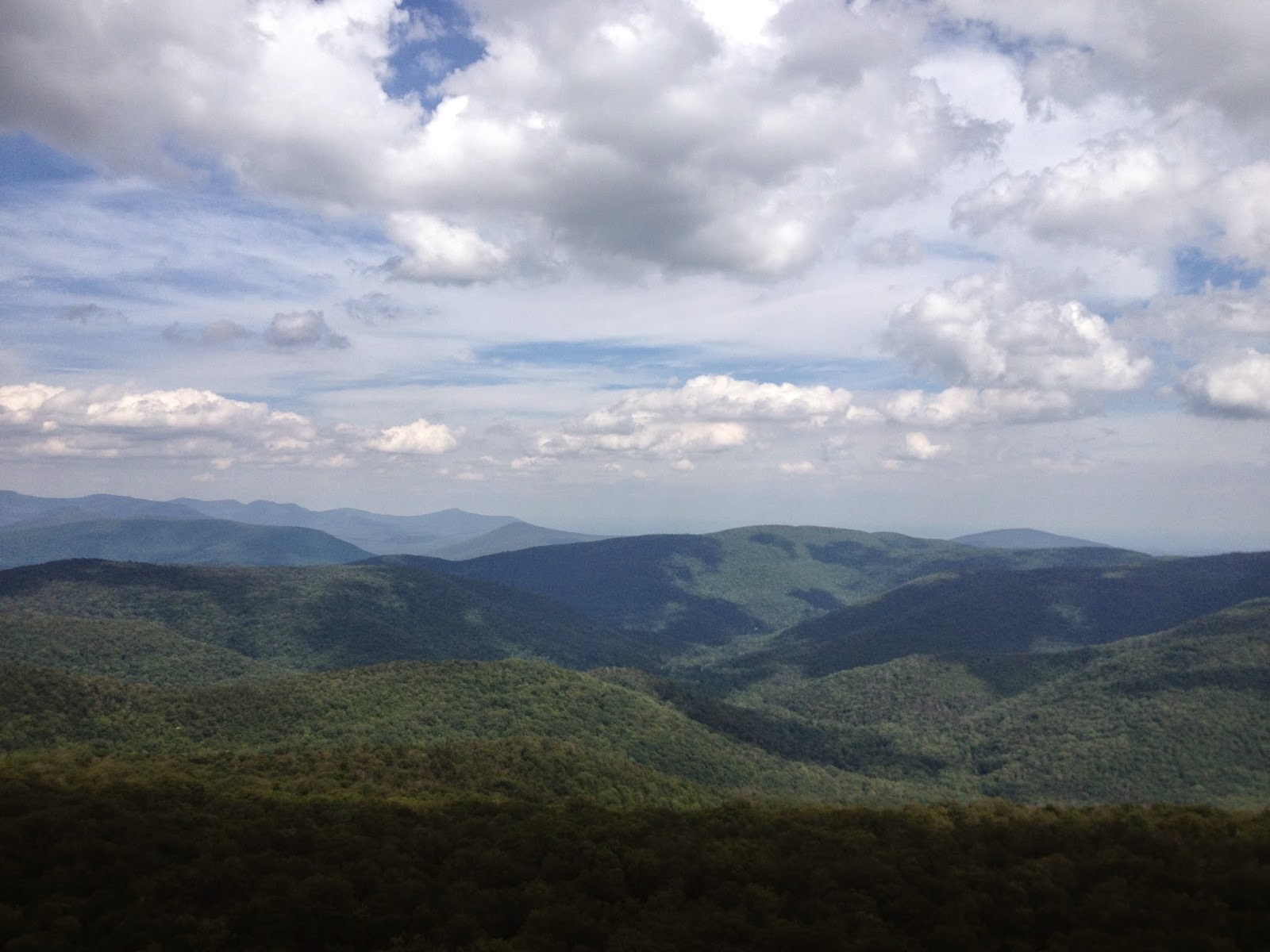 Ah, the allure of the outdoors in the springtime. After the longest and roughest upstate New York winter in recent memory, the feeling of summer-like weather is simply indescribable. The area trails are clear of ice and snow, and for the most part, mud-free and very runnable.

Like some runners, I view the sport of running not as exercise and not as a hobby, but as a lifestyle. That is, I don't view it as a chore that must be done to complete some arbitrary goal like training for a specific race or burning X number of calories. Rather, I reward my self by obtaining the sense of accomplishment that comes with a job well done, not to mention the positive physical aspect of