A Weekend on The Ridge

The Springlerack Fat Ass is basically a long, off-road group run through the Mohonk Preserve and Minnewaska State Park on the Shawangunk Ridge. It's a chance to see some pretty cool scenery while completing a challenging route. On a clear day atop the 2,200-foot ridge, one can see the vast expanse of Hudson Valley to the east and the Catskill High Peaks to the west. Runner's can start at whatever time they want, with the goal of everyone finishing around 4 p.m. This was Mike Siudy's fifth year organizing the run.

The trails were closed in the western potion of Minnewaska thanks to a forest fire last summer. That meant this year's Springletrack was a modified, shorter course. We were to run from Spring Farm in the Mohonk Preserve down to the Jenny Lane parking lot on Route 44/55—a distance of about 20 miles. The traditional Springletrack course is about 25 miles, traversing over High Point, through Witch's Hole State Forest, and finishing further east at Berme Road Park in Ellenville.

I ran the fat ass with my friend Adam two years ago, and we ran together again this year. The weather was unbelievably nice in 2015, with some great views from atop the Shawangunk Ridge and trails that were mostly dry. We weren't so fortunate this time around. Temperatures were in the low-to-mid 30s and most of the singletrack was covered in mud or

Altra as a brand is known for two things—all their shoes have a wide toe box and a zero-drop platform. Their newest trail model, the King MT, is no different. It's a shoe designed for wet, muddy, and gnarly terrain. Weighing in at 10.2 oz and with a 19 mm stack height, the King is Altra's lowest profile trail shoe and best compares with their Superior. It retails at $140.

A few months ago I received a pair of King MTs to try out, with no expectations of a favorable review—or for that matter, any review at all. I've put about 100 miles on the pair so far, over various types of terrain, and here are my thoughts. 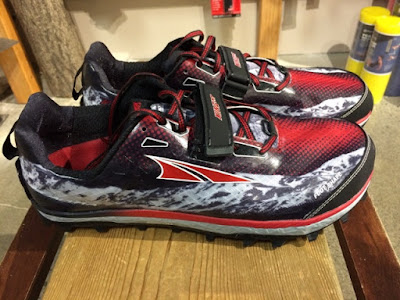 When I first slipped the shoes on, I was pleased to see that the King MT fits true to size. Previous Altras I've owned ran a half size small, but the King doesn't have this issue. Altra's new EGO cushion, which runs the entire length of the shoe, felt much softer and more comfortable that the brand's traditional EVA cushion. The roomy toe box allows the toes to splay—something I've really grown accustomed to since I first began wearing Altras a few years ago.

The main attraction is the traction. With deep, 6 mm lugs and a sticky Vibram outsole, the shoe handles very well on muddy, slushy, and snowy singletrack. The aggressive outsole does well to prevent slipping and sliding on hilly singletrack,