Now that the fall season is winding down and the ideal weather for runners has nearly passed, it can be tough to stay motivated to get outdoors. Add to that the hustle and bustle of the holiday season and all the treats and goodies that come with it and it's easy to lose that last bit of leftover base fitness you've been clinging to since the conclusion of the fall marathon season. Sure, there are plenty of local holiday-themed 5Ks worthy of your morning mileage, but it's easy to fall out of a regular running routine.

Enter social media and scavenger hunts. A scavenger hunt run such as #RunChatHunt is a fun way to get in some easy mileage without growing bored or skipping your planned exercise altogether. #RunChatHunt is free to play and the rules are simple - download a list of holiday and running related things find. Then take your phone on a run and snap pictures of the items on the list, finish your run, and post the pictures to Twitter. You can find all the items in a single run or split them

As a trail runner who's as involved with work, family, and social life as the next person, it's easy to take the little things for granted. To have the physical capacity to be out there on a run, surrounded by nature, fresh air, and beautiful scenery - this is a gift. I know it sounds cliche, but it's important to remain thankful for this gift that could suddenly be taken away without a moment's notice.

This realization hit me hard this past weekend. I had quite the scare during a routine trail run in a park I've traversed dozens of times. Running down a moderate grade slope, seemingly in the zone, I suddenly clipped a toe on a rock. Before I knew what hit me I was on the ground, face first in the dirt. On impact I banged my patella on an upturned root and began to panic that there may be some serious damage. After a quick systems check I was able to walk it off and then finish the run. (A few days later the knee feels okay, albeit a little tender when palpated.)

I spent the last half hour of that run thinking of how that day could have ended badly. A broken kneecap is no joke, so I've heard, and one of the most painful fractures one can sustain. The solution

What better way to relax after a run than to grab a snack and kick back with a good book. Anyone who knows me or regularly reads my blog knows that next to running, reading is my favorite pasttime. I enjoy polishing off pages by the dozen and will pick up pretty much anything that looks to be entertaining, interesting, or thought provoking. Reading helps me relax and open my mind to various viewpoints and different ways to express oneself through the medium of paper and pen (or keyboard and monitor.)

So what does any of this have to do with trail running? Well, there are three books in particular that I read a few years back that first got me interested in the sport. It was through these books that I first discovered ultramarathons even exist, let alone that I (and many other non-elite athletes) are more than capable of running beyond 26.2. These three books are a must-read for any current or aspiring ultrarunner, and the first two are both entertaining and educational for the general population,

Letchworth State Park: The Grand Canyon of the East


While Upstate New York is home to many beautiful parks, forests, and wilderness areas, there are none quite as popular as Letchworth State Park. Nicknamed "The Grand Canon of the East," and rightly so, it is the most visited of New York's 180 state parks. 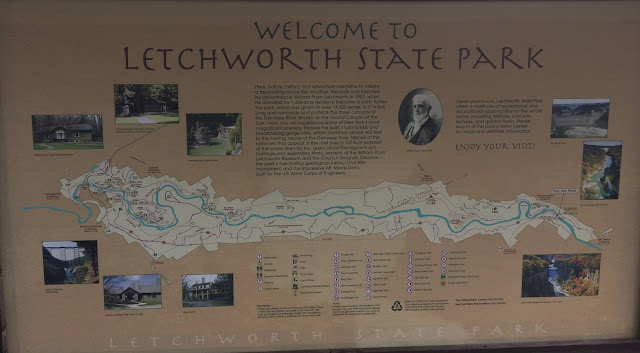 On the western edge of New York's Finger Lakes region, the Genesee River cuts through many miles of bedrock to create a gorge that exceeds 600 feet in depth within the park boundaries. The river snakes and winds through the gorge, forming three major waterfalls along the way before reaching the Mount Morris Dam near the northeast end of the park. In a 2015 USA Today reader's poll, Letchworth was voted the best state park in the entire country. (Watkins glen State Park, also in the Finger Lakes, took the bronze in the same poll.)

Since this blog focuses primarily on off-road running, you may be asking yourself impatiently "Sure, but what about the trails?" Well, Letchworth boasts over 60 miles of trails inside the park proper