When Eyes Collide Head-On With Graveyards: A Short Story

His confidence grew as he moved further and further along in his training plan. He felt the years of accumulated base-fitness and six months of race specific training were finally about to pay off. Still, he was wholly aware that his fitness goal was a difficult one. Sure, he'd finished a few ultra-distance trail races before, but the Oil Creek 100 in October would be a true test of endurance and perseverance, and his goal was to simply complete a 100-mile race for the first time.

With a promising weekend weather forecast, Lee Henry made the four hour drive

Strike Oil or Move On: The Oil Creek 100

"Strike oil or move on." In those five short words, the race slogan sums up nicely what the Oil Creek 100 is all about. Just like the region's oil barons of the 1860's, you either make it happen now or keep going forward until you do. No excuses. No whining.

The 100 mile route is three laps around Oil Creek State Park on the Gerard Hiking Trail. Each loop is 50k. After the third loop, runners complete the Boughton Acid Works Going Home Loop to make it 100.6 miles. A single loop 50k race and a two loop 100k race take place concurrently, with each starting time separated by an hour. The 100-miler is a Western States qualifier and serves as the RRCA 100 Mile Championship for the state of Pennsylvania. Runners have 32 hours to cover the 100 miles, with intermediary cutoff times at specified checkpoints throughout. 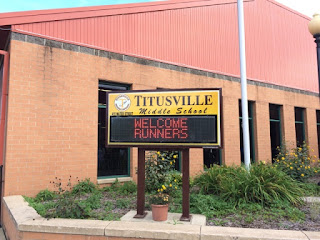 The 5:00 a.m. start for the 100 mile race felt like anything but a 5:00 a.m. start. An all around jovial mood and lack of nervous air kept the atmosphere light. I figured I was suffering from either a severe case of hyperconfidence or hypopreparation.1 Whatever the reason, the starting line felt more like a turkey trot with 170 of my best friends than the beginning of 100 off-road miles over the next 20 to 30 hours.

LED strobe lights lined the street behind Titusville Middle School. Any unsuspecting, low flying helicopter pilot would have spotted a hoard of headlamps bouncing down an illuminated runway just after 5:00 on that Saturday morning. There's no oil here, so let's get moving. And just like that, the first few physical steps toward a second belt buckle were now behind me. 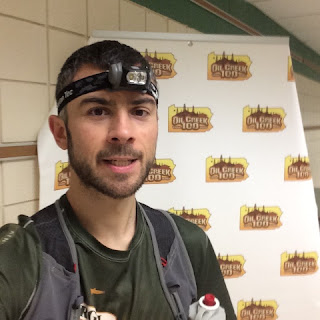 
The first mile and a half of each loop runs through a residential neighborhood on paved roads and a bike path, before hitting the rocky, narrow singletrack of the Gerard Hiking Trail. Having learned the course a month prior to race day really helped with my pacing. I ran the asphalt section comfortably and reached the singletrack with only a few dozen runners ahead