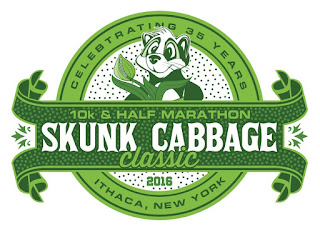 The 35th annual Skunk Cabbage Classic 10K and Half Marathon is one of the biggest and oldest races in the Ithaca area. Held this past weekend over open roads and rolling hills, it seemed like a good opportunity to help build some speed and maybe nab a half marathon PR.

Shortly before the start I found myself torn between what to wear during the run. At 9:45 am, the sun was out and the temperature was something in the low twenties after windchill. Not exactly traditional weather fare for mid-April around here. After some internal debate I opted for warmer clothing - an Under Armour long sleeve compression shirt with another long sleeve tech tee over it, some compression tights over my lightweight running shorts, some light gloves, and my FLRTC beanie. The shirt and pants were skin tight and did a solid job of keeping my core and appendages comfortably warm.


The air horn sounded and runners took off.  I hoped to maintain a 6:50-7:00 pace for the first half, then pick it up in the second half if I felt up to the challenge. I'd been running track repeats and tempo runs once or twice a week to work on building some speed and improving leg turnover. (One of the advantages of an unusually warm Upstate winter is the ability