And Miles To Go Before I Sleep

[This post is more of an experiment in creative writing as I retell my experience at the Virgil Crest 100. It is heavily influenced by several novels I've read and borrows from some of them. Click here for a more straight forward recap of the day's events.]

I can feel the heat closing in, feel them out there making their moves - those tiny seeds of doubt planted deep inside my cerebral cortex at such an early hour, destined to grow and blossom into a vast web of self-pity. As I slowly make my way toward the Rock Pile, those seeds are beginning to grow at an alarming rate. There seems to be a direct correlation between the arc of the sun and the declining state of my well being. Surely the mercury has not yet hit its high point of 85 degrees, but I already feel the lack of sodium intake is contributing to my loss of appetite and the dull pounding in my skull. 79 miles to go.

"Just make it to The Rock Pile."

As I plod onward I am passed by runners in the opposite direction, some looking like a million bucks and others ready to throw in the towel. As I walk up Hauck Hill Road I am reminded of my last training run on this part of the course, getting eaten alive by black flies in 90 degree heat. The flies appear to be satiated today. At least that's something positive I can dwell on for now.

I reach the end of the road and make my way through the winding singletrack to the Rock Pile aid station at mile 25. My head is still pounding and I my confidence quickly diminishing. As the orange blazed path snakes its way deep into the heart of Kennedy State Forrest, staked heads and severed limbs are exchanged for magazines. Yes! First one, then dozens of copies of Ultrarunner Magazine

Smile... Tomorrow Will Be Worse: The Virgil Crest 100

[This is one of two race recaps I wrote about the 2015 Virgil Crest Ultras. Click here for the other, which is more an experiment in creative writing than a conventional race report. Click here to read the race itinerary document I created for my crew. ]

One late September evening, while volunteering to provide food and assistance to a bunch of runners at the Hitching Post, is when I first got the itch. I decided then and there that I'd like to run this thing as a 100 mile debutante. It felt so epic just to be there, filling water bottles for 100 mile runners coming into mile 44 or 56 late in the evening. Knowing what these warriors had already endured, and what trials lie ahead throughout the night, brought a certain level of respect for all those attempting to go the distance. Having marked half the course the day before, I knew it wouldn't be easy. I'd have loved to spend the night at the aid station if I didn't have to leave at 10:00 PM to go to work at the hospital. 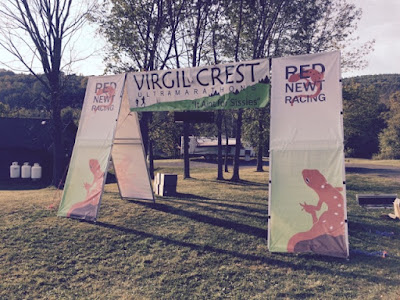 I spent nine months training for the 100, starting in late January, and come September 19 I was ready to go. My successful run at the Green Lakes 100K three weeks prior gave me some much needed confidence going into Virgil Crest, while the adverse weather conditions and uphill battles at the Whiteface SkyMarathon in late June helped me prepare mentally. After scrambling last minute to finalize my pacer situation, I had created a step by step game plan to help me get through this monumental task. The night before the race, I drove out to Virgil for packet pickup and to check out a

[I've included here a separate post which is an exact copy of the Google Doc I provided to my crew. It lists my ETAs for every aid station and what I planned to do at each, the contents of my drop bags, and descriptions of the individual course sections. The document is posted here as it was originally written, errors and all. It's remarkable how accurate I was in predicting the ETAs - I listed times without really knowing what I was doing, and most of them were within a few minutes of my actual time. The only additional part is the miscellaneous photos at the end of the post. Click here and here to read two differently written accounts of my race experience.]


Listed here is what I think is my best strategy for completing the 100 miles, given my level of fitness, knowledge of the course, race rules, and safety precautions. Below is a breakdown of what I will hope to do at each of the 15 aid stations and a brief description of what I will be facing in between each one. It may sound a little long winded, but I want to provide as much detail as possible. Please keep in mind that we are guaranteed to be thrown curveballs mid-race and that everyone will NOT go exactly as planned. Where possible, I will try to provide backup plans for certain possible

Miles and Miles of Mountains and Mud: Whiteface Vertical Weekend

"There's no way around the ankle deep water, and the best bet is always a straight line, right? The shortest distance between two points. And oh yeah, I guess I couldn't get any wetter if I tried, so into the water I go. In fact, I might as well use the buckets of rain to rinse the mud and blood from my legs so I can ascertain the damage. Just as I hoped, it's merely road rash down the front of my legs and nothing serious."

At this precise moment, the shear absurdity of the situation struck me and I couldn't help but laugh. I had already climbed 4000 feet up the Whiteface ski slopes and back down the other side in a rainstorm, with the top half of the mountain blanketed in mud. The slow ascent wasn't terrible, but it was tedious to carefully place every footfall where I could find the most traction, which was to say very little. Several dozen pairs of shoes had already tread the ground on the mountain's upper half, churning up the knee deep mud really nice. Unprepared for the storm, the only jacket I had brought along was a windbreaker I bought at an auxiliary sale at work for $10. Not quite ideal for keeping warm and dry during a rain storm at 4,500 feet.

It was the descent that had nearly killed me, sliding down every which way, falling more times than I ever had in my life - sometimes sliding into rocks and tearing skin off my legs in the process. Now here I was on the relatively flat Flume Loop before another identical ascent and descent of the mountain. And wasn't that Stevie Kramer, passing in the opposite direction, than just assured me I was heading the right way when I thought I may have taken a wrong turn? I mean SkyRunning world