With only a few days to go before the Cayuga Trails 50, I feel like I'm as ready as I could possibly be. The previous five months of training have been a lead-up to this coming Sunday. The last few weeks have been a combination of running on the course and getting in an ample amount of hill work. I'm hoping to run a PR for the 50M with the secondary goal of beating last year's time here, and feel like I have a good chance to do both.

The fun starts tonight (Friday), as Scotie Jacobs and Ithaca Beer are bringing back the Lucifer's Steps brew in conjunction with the race. The brewery is hosting a MUT runner social gathering of sorts, along with a pre-race briefing. The Race festivities continue tomorrow with the Trails in Motion Film Festival. Even if you are not running the race, considering checking out the Film Festival on Saturday afternoon, held downtown at Cinemapolis. I attended the festival last year and it was well worth it! (Click here for a full rundown of the race schedule of events.) There will also be mid-race live
tracking of all runners through Ultra Sports Live.TV. My bib number is 1043, for anyone who wants to follow along or at least confirm that I'm not lying dead in a gorge somewhere.

The Past Two Weeks

Two weekends ago, my friend Rob and I met at Robert Treman State Park to run one 25 mile loop of the entire course. Race direct Ian Golden was looking for volunteers to track the course data via GPS, to be used by Ultra Sports Live.TV for the real-time runner tracking during the race. Technology is amazing, right? I studied Ian's preview video of the course on Youtube and printed a turn-by-turn cue sheet so we could follow the course exactly. (Aside from a slight mishap near Lickbrook, there were no wrong turns.) We ended up walking a lot, but learning the entire course - the hills, turns, and varying terrain -  will be helpful in pacing myself come race day.

Over the past week, I've been taking some classes with the Animal Athletics coaches Yassine Diboun and Willie McBride to learn some things that I hope to practice throughout the summer as part of my Virgil Crest training. The Portland, Oregon, based coaching duo returned to Ithaca this year to put on clinics for a couple of weeks. In their classes, Yassine and Willie stress the importance of functional movement in both endurance sports and everyday living. I've attended a few classes to learn some things about speedwork, full body strength training, core strengthening, running hills, and mental training. I also had the chance to do a few group runs with Willie and Yassine, and feel I've learned some nice takeaways from these two experienced endurance athletes to help me over the next four months.


Side note: Yassine Diboun lived in Ithaca for many years while he first got involved with trail running, and was actively involved with the Finger Lakes Runners Club. Virgil Crest was his first 100 mile race, which he won, before moving west and becoming a coach and elite ultra runner. After running Cayuga the past two years, Yassine had to leave town earlier this week to represent the USA at the IAU Trail World Championships in Annecy, France. The race starts at 9:30 PM EST on Friday, May 29, and will be covered live by iRunFar here. Best of luck to Yassine and the rest of Team USA!

Last Saturday, Yassine and CT50 RD Ian Golden led a group run over part of the Cayuga course, covering the Treman and Lick Brook sections. Ian ran around with a Go Pro while a cameraman was on hand to grab some video footage of the trails. I was told a film about the race may be in the works. The run was pretty casual and social, and the weather was perfect! A few of us even got to plow through the Cayuga Inlet creek crossing an extra time for the cameras to get some extra footage!


As if that preview run wasn't enough, my parents and cousin took a ride up on Sunday to hike around Robert Treman State Park. I met them there and again got to cover part of the course, this time stopping to take some pictures. 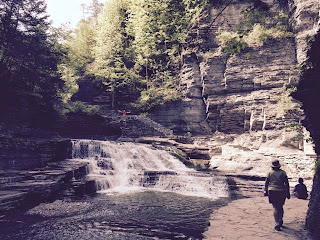 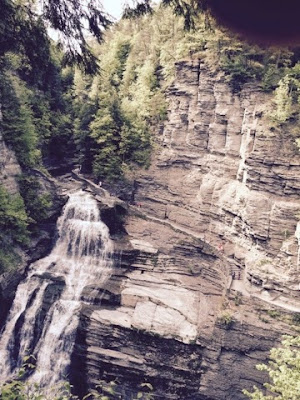 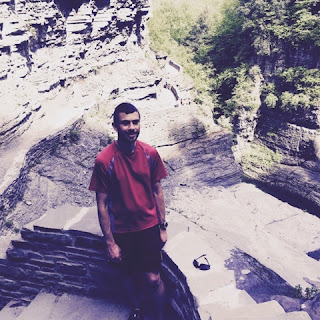 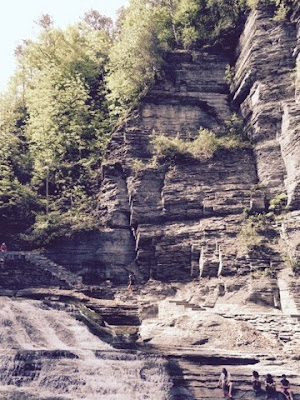 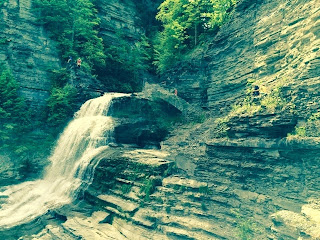 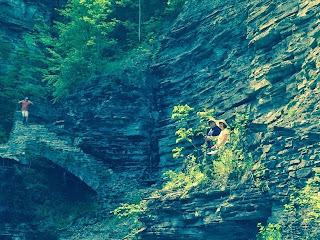 This week I've run very little. Thursday morning Willie McBride led the Animal Athletics hill running class, and I followed that up with the Ithaca Festival Mile on Thursday night. Despite an ice bath, I feel the soreness as I sit here and type this on Friday afternoon. The IFM is a flat, straight run down North Cayuga Street and runs right past my house. As someone who detests running speedwork, the pain I felt midway through the mile seemed worse than any marathon I've run before. It's obvious that improving aerobic capacity is something I need to work on that can be useful in both short road races and trail ultras. The good news is that racing a single mile only lasted a few minutes and was followed up by the Ithaca Festival Parade, the kickoff for the annual three day Ithaca Festival.


Aside from packing drop bags and an easy run tomorrow, I'm ready to shake, rattle, and roll on Sunday, come rain, shine, or miscellaneous. My next blog post will be a recap of the race, hopefully in the creative writing format, to include the good, the bad and the ugly of the Cayuga Trails. Good luck to everyone running this weekend, and thanks in advance to Ian and all the volunteers! See you on the trails!


Additional Resources and Info on the Cayuga Trails 50

My race report from Cayuga Trails 2014

The Ithaca Journal's feature length article on the event