The Loneliness of the Long Distance Belt Buckle

It sits alone, one of its kind, longing for the companionship of others of its ilk. Yes, since taking up residence on a desk in a spare room last September, the Virgil Crest 100 Mile Belt Buckle has spent many a night alone, no other buckle in the vicinity. This buckle has many cousins in the form of finishers medals, pins, plates, and pint glasses. But the twelve ounces of solid pewter that is the embodiment of a hundred mile journey remains the first and only of its species in this abode.

Many months ago, I got to thinking of what I could do to provide a more nurturing environment for this treasured inanimate object, and so turned to Maslow's third level of human needs. With the beloved Virgil Crest recently departed from this world (see obituary below), it is impossible to bring home a brother or sister to the buckle, so a friend of similar nature will have to suffice. Something that represents hard labor, struggle, and sacrafice, at a level comparable with the Virgil buckle. Something that must be earned and is far from guaranteed. Something that, when looked at and held, will provide a catalyst for a great flood of memories—some good, some bad, and some ugly—that will make for spectacular campfire storytelling
a generation or two from now. Only one thing can meet these needs and live up to the trail running hardware standard. I think we all know what it is.

The silver belt buckle award originated with the Tevis Cup, a 100 mile off-road horse race that awarded the buckle to all official finishers, meaning those who completed the course in under 24 hours. In 1974, Gordy Ainsleigh completed the Tevis Cup horse race on foot in under 24 hours and was awarded the same silver belt buckle as the riders. Over the next few years, more people began competing in the race on foot. In 1977 the Western States 100 Endurance Run was officially born, and subsequently, the belt buckle became the standard finishers award for all 100 mile foot races.

It's possible that I may return home empty handled, tail between legs, humbly beaten into submission. It's for this reason I have worked hard over the better part of a year to provide a mate for the Virgil Crest buckle. There are no guarantees—I can only increase my odds of success. But success or failure, it is the road that got me to this point will always be defining and memorable.

And that, my friends, is why I will be running the Oil Creek 100 a few short weeks from now. 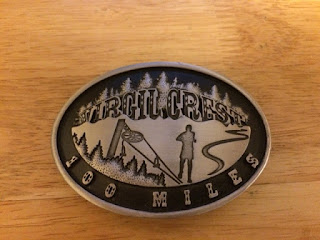 Born in September 2008, the race was one of only a handful of 100-milers at the time, and quickly rose to prominence. The Iroquois Trail Ultras saw some high level of competition in it's 50 and 100 mile distances, and changed its name to the Virgil Crest Ultras in 2010. Known for its punishing ascents and descents on the Greek Peak ski slopes, Virgil Crest gained a level of notoriety as one of the most difficult east coast ultras.

The family would like to thank the runners and selfless volunteers who made the race possible over the years. Calling hours will be held year-round, 24/7, as the forest trails are never closed. In lieu of flowers, please remember to power hike hard up the slopes and avoid leaving trash on the trails.