The Frozen Branch 50k & 25k is put on by Scott McGee and Jeff Darling, architects of the increasingly popular Twisted Branch 100k. Frozen Branch runs from miles 42 to 58 on the TB 100k course, stopping in Urbana at the location of Twisted's final aid station. Frozen Branch 25k-ers finish here, with loads of hot greasy food at their disposal, while 50k-ers have the pleasure of slogging it another 16 miles back to the start at the Evangeline Shelter in Urbana State Forest. 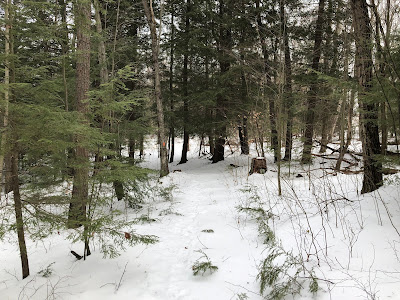 This race is about as old school as an ultra can get these days. The event was capped at 40 entrants between both distances, with 12 finishers in the 50k and 18 in the 25k. (It's an increase from the two and seven finishers, respectively, in the inaugural 2018 race.) The entry fee was low, there were no fancy prizes, sponsors, or swag, and there were no course markings aside from the permanent orange and white blazes along the Finger Lakes Trail. Upon check-in, each runner was randomly given a playing card from a standard deck in lieu of a bib. At the 25k turn-around, we'd be given another card to match the one we started with in order to prove we completed the whole course. Runners lined up and the lucky SOB in front of me received the Ace of Spades, while I had to settle for the jack of the same suit.


My goal for Frozen Branch was a long training run on trails. Upstate New York in February usually sees enough snow and ice to relegate trail running to slow slow grind. I'd been mostly sticking to roads since late December in order to up the tempo and improve my cardiovascular fitness. At any rate, there is hardly an abundance of trail races in the Finger Lakes region. I was happy to jump on this opportunity on UltraSignup before it sold out in a matter of days.

Upon check-in, I was told that I'd randomly been selected to pick a door prize off the table. As I deliberated, Chris O'Brien wandered by and warned me "Pete, there's nothing on that table that can help you now." True word. I went for a brand new hydration pack—the Camelbak Octane XCT. The Salomon pack I'd been running in busted beyond repair in the early miles of Twisted Branch last summer. I was still running with it, using a carabiner to hold the chest straps in place, but it was great to get a new pack with a sizable bladder. I dropped the Camelbak in the car for another day, not interested in breaking it in during a long race.

Scott sent us off to hike straight up a snowy hill. I went out at my own pace in the front, and as punishment was forced to break in the trail for most of the outbound portion. I ran most of the 7.5 miles to first aid station with another guy from Ithaca. We worked together to keep our eyes open for the orange blazes—a task that proved tricky, since we also had to watch our steps carefully in the lumpy snow.

All went well until a reroute in the trail near the CR-13 road crossing threw us off for a bit. I'd run this section of trail before and remembered going straight across the road and up a steep hill. The aid station we'd been promised was nowhere in sight. After poking around for a few minutes looking for hidden trail markers, I consulted the course map we'd been given at the start while expecting other runners to catch us at any moment. The map showed that we turned left up the road and that the AS was right around the corner. I yelled to Kurt to follow me, and sure enough, there was Scott in an AS tent with a table full of calories.

I began the snowy slog up to Lake David alone and ended up running the rest of the race solo. The forest was serene—the only sounds being my own breath and crunchy footsteps. At one point I watched a large bird (possibly a heron) dart straight across the trail in front of me, followed a few seconds later by a doe. Both were so quick they were long gone by the time I reached the spot where they crossed. I immensely enjoyed the hours of solitude on the trail, despite only slowly progressing toward the finish.

I reached the turnaround AS in Urbana in about 3:20. Jeff, Laura, Laura, Chris, and a few other volunteers had hot food ready for the 25k finishers and any 50k-ers who wanted something savory and fatty to fuel up with. I turned down repeated offers of greasy bacon and grilled cheese, grabbed a jack of spades card to match the one I was carrying, and set out for the return trip. On the way out, I saw that I had about a 10-minute lead over the next 50k runner—assuming he wasn't planning to stop in Urbana and settle for a 25k finish.

The inbound half of the course was about equally as difficult as the outbound half. Inbound has about 800 feet of net uphill (as opposed to 800 feet net downhill on the outbound), but I no longer had to break trail. It was also easier to navigate the course—just follow the tracks all the way back.

The final mile was the best mile of the race, letting loose and just careening down the steep hill right up to the shelter's campfire. In a time of 7:08, Frozen Branch was my slowest 50k to date by over an hour. It was also my first ultramarathon win. (Yeah, there were only 12 finishers, but I'll still take it.) Haul away the snow and it would still be the most difficult 50k I've ever done. (Results.)


The campfire and killer veggie chili made it worthwhile to stick around in the freezing cold and hang out with other finishers as they made their way in. We sat around the campfire with way too much chili at our disposal (courtesy of Jeff and his daughter) and other hot food. I learned that I'd see many of these new faces again in April at Michael Valone's Palmers Pond Fatass 50k.

Thank you Scott, Jeff, and the rest of the volunteers for keeping us going on these remote and challenging trails. 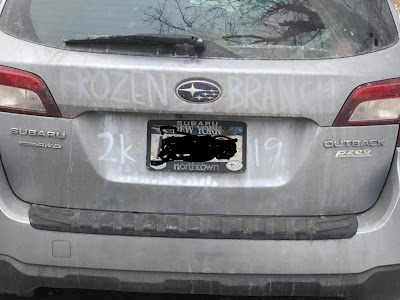